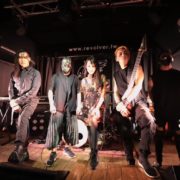 CHTHONIC has released A Crimson Sky’s Command, the second title track from their latest album, on October 8th. Earlier on in March, CHTHONIC performed the song in public for the first time at one of the biggest music festivals in Taiwan – Megaport Music Festival. The symphonic melody immediately resonates with the fans; one of the fans even covered and uploaded the refrain right after the show. For their just-released music video, CHTHONIC also uses clips from their performance at Megaport Festival and blends it with the bold and vigorous calligraphic elements.

Many tracks in CHTHONIC’s new album Battlefields of Asura are associated with different Taiwanese gods and goddesses. A Crimson Sky’s Command is one of them and was inspired by the god of war “Te-ia-kong”, or “Xuantian Shangdi” in Mandarin. Since it’s about the god of war, the lyrics naturally takes on the warpath and aggressiveness. However, Freddy stated that on top of the imagery at the face value, it also represents the courage we need to face, confront and overcome our own weakness.

CHTHONIC’s first album in 5 years is going to drop on October 12th in Europe and the US. Different merchandise will also come out in different areas, including Taiwan, Japan, Europe and the US. For fans interested, please check out the CHTHONIC website!

CHTHONIC’s first overseas tour for their latest album in No Maps fest...
Scroll to top